Yesterday marked the 20th anniversary of my favorite Simpsons episode of all-time (spoiler alert), ‘Homer at the Bat’ and I couldn’t help but unearth this Top 9 List from an old blog post i wrote, strangely enough, 2 years ago today (just noticed the date, how random is that?!!?).  Until I read the article linked above, I never realized how poignant ‘Homer at the Bat’ was in the history of one of the longest running TV shows of all time. It appealed to the baseball geek in me then and still does today, but it’s cultural significance lives on. Below, is the Top 9 list I made 2 years ago and I still stand by the ranking of all of these. I miss the heyday of my favorite show and don’t care much for the new episodes that still air on the same Sunday primetime slot I watched when I was younger…in fact, I dont even watch it anymore. But we’ll always have the classics, and with that said, here’s the list:

9. Deep Space Homer – Homer turns out to be just “blue collared enough” to drive the ratings of NASA’s next space shuttle launch. NASA was losing in the ratings poll to “A Connie Chung Christmas” and something had to be done. We find out that NASA is actually run by super intelligent chimpanzees as Homer takes off into space, nearly destroys the mission, but saves the day at the end…Along with the help of James Taylor’s unique breed of folk rock and the all-too important “inanimate carbon rod”. 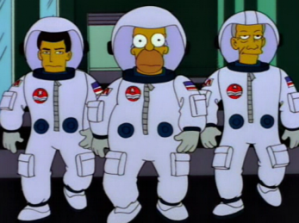 8. Two Bad Neighbors – In the midst of an Evergreen Terrace Rummage sale, George H. Bush stops the party and moves in across the street from the Simpsons. A Dennis the Menace/Mr. Wilson relationship ensues between Bush and Bart and a war of the roses between Bush and Team Simpson (Homer and Bart) has a rainbow afro glued to Bush’s head and a swarm of locusts invading Bush’s personal space. In the end, living across the street from the Simpsons proves to be impossible for George and the sweetheart that is Barbara Bush. Meanwhile, Homer discovers that he and Gerald Ford are kindred spirits on their way to watch football, eat nachos and drink beer. 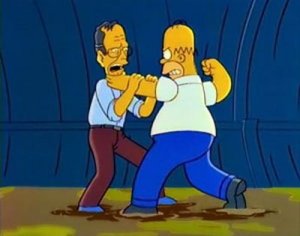 Memorable quote: “I come to bring you gift for warming of house, but instead I find you wrestling with local oaf?” — Mikhail Gorbachev

7. Colonel Homer – This is a favorite for sure. Tammy Wynette, stars as the voice of country bar singer Lurleen Lumpkin. Her sweet melodies touch Homer with their straight to heart honesty (“Well…except for the pickup truck part”) and Homer embarks on a mission to manage Lurleen to stardom. The songs are beautifully written and Wynette churns out a couple of classic songs, that if you buy me a drink, I’ll sing for you. In the end, Homer chooses his marriage over the prospect of shacking up with Lurleen and guiding her to stardom and sells her contract for $50 to a music exec.

Memorable Quote: “As much as I hate that man right now…You gotta love that suit!”– Bart

6. Bart the Murderer – Bart is reminiscent of Ray Liotta in ‘Goodfellas’ as he stumbles (literally) into a job as a bar man for Fat Tony and his mob. Principal Skinner goes missing and the mobsters are prime suspects, they betray Bart and explain to the court that “the boy was in charge of the whole operation”. In the end, Skinner reappears, Bart is exonerated and Neil Patrick Harris plays Bart in the made for TV movie. 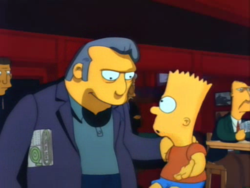 Memorable Quote: “What have I done to deserve this flat flavorless Manhattan?” –Mob Boss

5. Simpson and Delilah – In this early season (2) classic, Homer discovers a new miracle baldness cure, Demoxinil, but can’t afford it and charges it to the company insurance policy. He wakes up with a full head of hair and races down the streets of Springfield notifying the world. My favorite scene of all time happens when Homer and a random stranger meet in front of the Jebediah Springfield statue after they’ve both been running at the street proclaiming “I have hair!” They bump into each other, face-to-face, squint and in unison shout “Demoxinil!!!” They hug, high five and dance as it cuts to a commercial. Epic.

4. Flaming Moe’s – To avoid spending any time with Marge’s sisters, Patty&Selma, Homer ducks away to the kitchen to make a cocktail. The beer ran out, so Homer threw everything, but the kitchen sink into the drink. He doesn’t notice until the end that he slipped some ‘Krusty brand non-narkotic children’s cough syrup’ into the concoction. When one of Patty’s cigarette embers falls into the drink, a large conflagration arises and the drink becomes instantly delicious. Homer shares the recipe of his “Flaming Homer” with Moe the bartender, who promptly steals the idea and markets the shit out of the “Flaming Moe”. Moe’s tavern quickly becomes the hottest spot in town, purely because of the Flaming Moe. Aerosmith performs on the pool table and Moe sings along. Just as Moe is about to sell the drink for $1 million (which his bar maid convinced him to split with Homer), Homer appears from the darkness of the pub, a la Phantom of the Opera and reveals the secret ingredient of the Flaming Moe: children’s cough syrup. The contract gets torn up and Flaming Moe carts start appearing at every corner. Moe’s goes back to being the comfortbale dankpit that Homer and the bar flies used to enjoy. 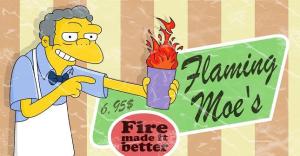 3.5 Homer vs. the 18th Amendment – I had to slip this one in at the last minute. Who can forget when Bart got drunk at the Springfield St.Patrick’s Day parade, was all over the news and led to prohibiton in Springfield? Of course, this prompted Homer to bootleg liquor, build a distillery in his basement and keep the town drunk via his alter Ego: The Beer Baron. Rex Banner was brought in to replace the banished Chief Wiggum and ultimately chase down the elusive Beer Baron. When the pointless prohibiton law was discovered to have never been in place, Wiggum returns, Homer is exposed and Rex Banner gets catapulted out of town, literally. 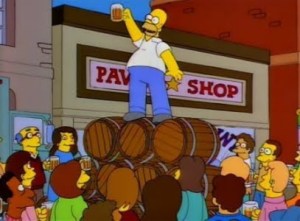 Memorable Quote: “To alcohol! The Cause of and solution to all of life’s problems!”

3. Burns Verkaufen der Kraftwerk – Mr.Burns dupes the Germans into buying his leaky nuclear power plant. They instill their German business techniques and Homer is clearly the odd man out. The best daydream sequence this show has ever seen comes when an elated Homer dreams about “The Land of Chocolate.” The power plant stock booms, but Homer recently sold his shares for “a cool 25 bucks!”. Finally the Germans have had enough of their terrible investment and sell the plant back to Mr.Burns for “a most unreasonable price.” Homer gets his job back. 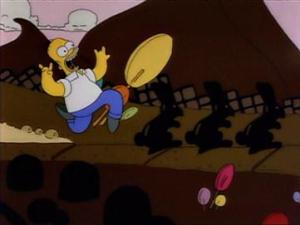 2. Itchy & Scratchy Land – “Smashy!Smashy!” The Simpsons take a family vacation to Itchy & Scratchy Land…”Where nothing could possiblye go wrong…uh…possibly go wrong…Thats the first time something’s ever gone wrong.” This is the greatest theme park ever assembled. While Bart and Lisa are having fun at “Searing Gas Pain Land” and “Unnecessary Surgery Land”, Homer and Marge are celebrating New Year’s “Every 10 minutes” at TGI McScratchy’s on “Parent’s Island”… Then, everything goes wrong. Bart and Homer get locked up by the park police for kicking the guy in the Itchy suit and the parade robots turn against all of the park goers. As the park is evacuated, The Simpsons are purposefully left behind. “When you get to hell, tell ’em Itchy sent you!” It’s a family triumph as the Simpsons ultimately detonate the robots en route to “the greatest vacation ever!” 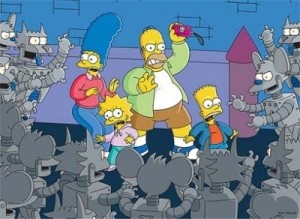 1. Homer at the Bat – The single greatest episode of all-time. I’ll fight you for it too. Maybe its just cause I’m a baseball nut, but it doesnt get any better than when when Mr.Burns recruits 9 prominent major leaguers and gives them token jobs so they can compete on the company softball team and help him win a $1 million bet. Of course major catastrophes happen to 8 of them and all of the employees have to take the field for the championship game against Shelbyville. All except Homer, of course. Since nothing happened to Daryl Strawberry, who plays his position, right field. In the end, Mr.Burns plays the percentages and pinch hits the right handed Homer, for the lefty Strawberry with the bases loaded. Homer gets hit in the head with the pitch and Springfield wins. The rest is softball (and Simpsons) history. 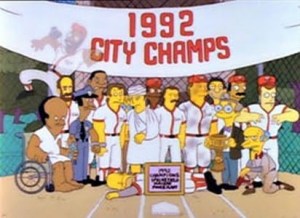 Memorable Quote: “You watch too many movies Sax.” — Lou

and finally, for your listening pleasure: