Welcome! Have a seat and get comfortable, as my Top 18 Albums of the Year List has arrived. This year, we’re gonna do things a little bit differently… Rather than putting out the entire list all at once, i’m gonna drop an album a day, so subscribe and check back often (sometimes twice a day, to make sure i get my whole list out before Pitchfork publishes theirs).Also, I’m going to look to tag the artists on Twitter/FB with my posts to see what kind of responses and traffic spikes i see on the blog. Why? Cause it sounds really cool and I’m kinda bored/damn curious. This year’s list will have links to tracks as always. Some of the links will go straight to RapGenius.com where you can play the track on YouTube/Spotify, check the lyrics & explanations and even decipher ’em yourself…(Shout out to RG and my boy Maboo that i grew up with) So make sure to click on EVERYTHING. Hyperlinks galore.

2012 was a badass year in music. From where i’m standing, indie rock made impressive strides and the electronica influence kept steadily permeating through its veins. Boundaries are being broken, sounds are evolving and while there’s still a lot of crap that sounds the same, the evolutionary cycle of independent rock and roll is still very much in motion. THIS is what i value in music. Is it different? Is it fresh? Does it sound like something i haven’t heard before? Is the artist truly being expressive, or is it just mindless babble? Innovation and originality appeal to me.

Even hip-hop saw some faces stick out in the crowd, crossing the mainstream line, but still remaining conscious and dropping some seriously quality stuff. Two albums stood out in particular, which i’ll delve into in this list, but it felt like there was hope for hip-hop again; that maybe we’re starting to witness a resurgence of conscious hip-hop. Weaving a tale from start to finish on an album. Be it about where you’re from, or what you’ve been through, rather than ignoring the path you took simply to stroke the life you lead. “Da Art of Storytellin'” (c. OutKast/Slick Rick) if you will, is what i miss the most in hip-hop, but found it this year a couple of times….

What the 2011 List predicted as far as electronica and electronic fusions being the future, came alive in some artists and unsurprisingly, most of them were from the UK.

Anyways…before i get started, i want to use this first post to tout the albums that were on the outside looking in on this list. Narrowing the list down to 18 albums is tough and ultimately this entry might be the most fun of them all, since it focuses on a range of different artists, rather than the singular focus i’ll give to an album on each post. But enough babble…Here are the VERY worthy casualties that sat JUST outside of the Top 18.

Japandroids – Celebration Rock – Canadian post-punk rockers. So. Much. Energy. One of my favorite shows of the year too, complete with A FUCKING MOSH PIT. Made me feel like a kid again. Highlights: ‘Fire’s Highway’, ‘Continuous Thunder’ Also, here’s a really rad photo i took at the show: 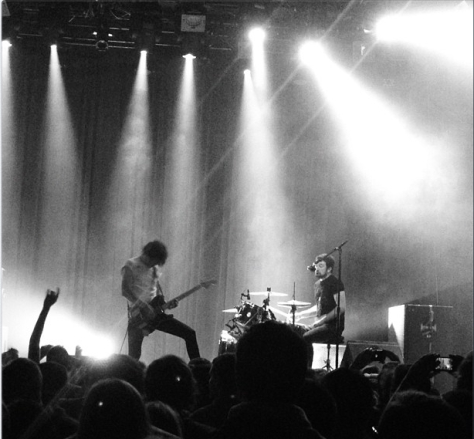 Grimes – Visions – Unique beyond words. This tiny little Canadian girl makes some of the most intriguing electronic beats. Her videos are a wild interpretive masterpiece, like this one for ‘Genesis’:

Sharon Van Etten – Tramp – Probably the last one to go from the list. Great effort from this Jersey-born singer. Highlights: ‘Give Out’, ‘Serpents’

Poolside – Pacific Standard Time – Great chill out album. Highlights: ‘Next to You’

Alabama Shakes – Boys & Girls – I defer all descriptions, videos, links, etc… to my April blog post on the Shakes.

Father John Misty – Fear Fun – Not gonna lie…this one really hurt to cut out. Holy cow what an artist. His stage presence is remarkable and you might know FJM as J.Tillman of Fleet Foxes fame. I love how ‘LA’ this album is and his set at Outside lands 2012 was the best surprise of the weekend. The single off this album, ‘Hollywood Forever Cemetary Sings’ was quite possibly the single of the year, with a must watch video featuring Aubrey Plaza:

Matthew Dear – Beams – Oh how I love the Ghostly International label. Dear represents one of their flagship artists and while ‘Beams’ ultimately didn’t make the cut, Ghostly is stil represented. here’s a badass video for ‘Her Fantasy’:

Gary Clark Jr. – Blak and Blu – We might have the second coming of Jimi Hendrix on our hands with this one. This guys absolutely shreds on the guitar. Here’s Gary performing ‘You Saved Me’ (God I love this song) on my very favorite radio show on the entire planet, KCRW’s Morning Becomes Eclectic:

Welp…those are the outsiders. And as you’ve seen, I’ll feature all sorts of links to tracks, videos, sites, articles, etc… to make every post super interactive so you can experience the music and not only who the artists are, but also where they’re from and what goes into their projects. I’ll keep a running playlist of each album on Spotify and only add the albums as the posts come up, for maximum suspense! Hit ‘subscribe’ when you find the list on my Spotify page an you’ll get an alert when the album gets added.

I’ll post on FB/twitter every day when a new post is out, but count on somethin every day for the next couple of weeks. Feel free to subscribe to this blog as well. Ok…..