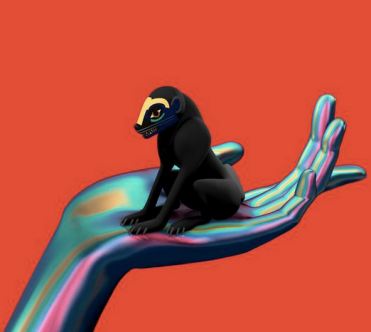 Wonder Where We Land, the 2nd full-length LP from English producer Aaron Jerome, (stage name SBTRKT) is an album about process. It’s about a calculated vision, a journey around the world to seek out the players for and the creation of an otherworldly land.

The album’s first sessions were recorded on Osea, a tidal island off the Essex coast that floods every 8 hours daily. So picture this, Jerome and company (Sampha, Chairlift’s Carolyn Polacheck, et al..) have a 4-hour window to drive across the ocean on a tidal road from Essex to a remote studio in Osea and then, they’re essentially stuck there when the roads flood as the tide rises. It’s a creative strategy that affects the mind-frame of an artist and surely lends to deep focus and creativity in the cryptic setting. Pigeons & Planes did a killer feature on the album and had a segment on Carolyn Polacheck’s strange journey to get there, it’s worth a read.

In Osea, the insidiously haunting “Look Away” with Polacheck was recorded as well as the brilliant “Temporary View” with Sampha. “Temporary View” was a call-back to a formula devised by Jerome on SBTRKT’s debut LP (our #1 album of 2011), which changed the face of electronic collaborations, as he churned out now classics with Sampha, Jessie Ware and “Wildfire” with Little Dragon’s Yukimi Nagano (Go ahead and consider “Widlfire” the most important catalyst for the electro-soul collaboration movement.)

But I digress, Jerome chose a handsome slew of collaborators here and it’s clear that he sought to not only highlight his production with some of the most significant players in music today like Ware and Vampire Weekend’s Ezra Koenig,  but also anoint the next class of rising stars in Raury, Koreless and Denai Moore. “The Light” with Moore is one of the album’s most promising moments and he even subtly interpolates Moore’s vocals on other tracks; This was another strategy Jerome employed to build the world of this album around it’s players: While the featured artists are credited on their primary tracks, they appear again on other tracks as voices in the background and it plays into the concept of a mysterious land that builds its existence within the listener’s perception of where they are on the album at any given point in time.

Also not lost, is the visual component of this record and how it contributes to the creation of this world. The interactive “Look Away” video, features a mysterious character who’s eyes follow you as the music plays; The video for “New Dorp, New York,” goes in depth about the mammal on the cover of the record and builds the story of the dark and remote world of Wonder Where We Land:

I could go on about the infinite nuances of Wonder Where We Land…How SBTRKT was able to pry a deeply emotional lament from trap-lord A$AP Ferg on “Voices in My Head,” or how Koreless’ co-production on “Osea” is Jerome calling attention to his most similar contemporary. I was puzzled at the mixed reaction of this record, the follow-up to what I argue is the most influential album of the last 5 years. Jerome’s journey into Osea with his crew and across the Atlantic to corral the album’s final players is an essay in collaborative production. I keep picturing him on a flight with a to-do list (get coffee with Ezra Koenig in New York , call Carolyn Polacheck, fly to Atlanta to meet 18-year old MC Raury, find wherever Ferg is and go there, etc…) From where I’m standing, this was a uniquely digital effort that meticulously plucked significance from a saturated music scene to create something special and a world unto itself. Let me know when you get there.