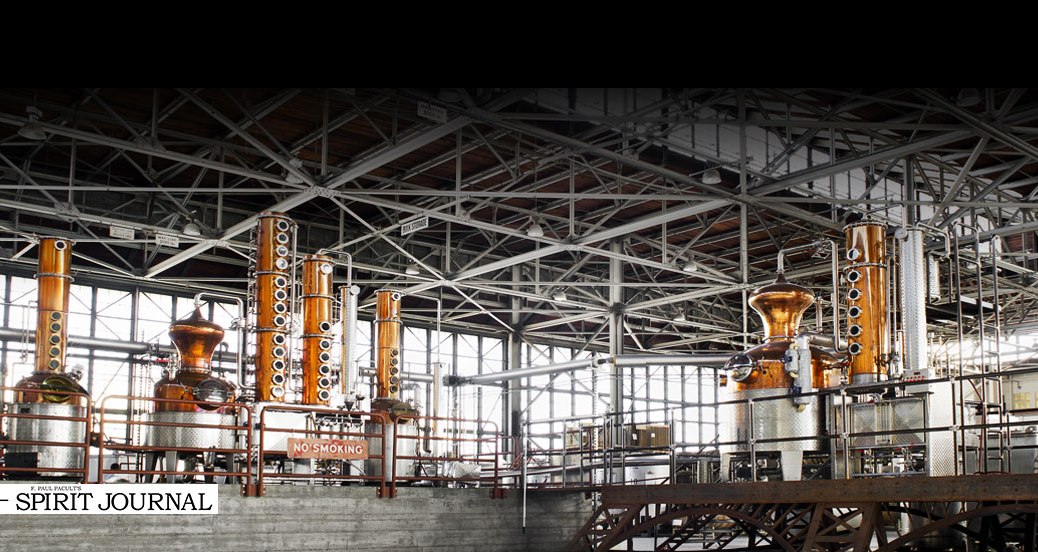 This post originally appeared in The Bold Italic on 01/09/15.

by ADRIAN SPINELLI
Jan 09 at 6am

There’s a world-class craft spirits scene in the Bay Area, one founded on both tradition and innovation. On one end of the spectrum, there’s a traditional distiller who’s been in the business for over 30 years, and on the other, there’s a young company making whiskey distilled from beer. The grain-to-glass movement is picking up steam and there’s much to discover throughout the Bay.

While only a few of these distilleries have an operating tour and tasting room, their bottles are available at hundreds of bottle shops and bars throughout the area. This is our way of enlightening you to what’s happening right here in your backyard: Fine single-malt American whiskeys, craft vodka and liqueurs, some of the best gin in the world, and we’ve even included cocktail recipes to get you in the mood. Cheers!

The granddaddy of them all. St. George has been making craft spirits in the Bay Area for over 32 years and the company has been in its massive Alameda warehouse for the past 11. This impressive distillery offers tastings and tours from Wednesday through Sunday and it’s a sensory experience of the highest order.

Originally started as an eau-de-vie operation making brandy and liqueur, St. George gradually expanded over time. The Terroir Gin, which seeks to emulate the feel of Mt. Tam with its Douglas fir, bay laurel, coastal sage, fennel seed, juniper, and wok-roasted coriander botanicals, ushered in a reinvention for St. George. Now you can enjoy everything from single malt American whiskey and a divine pear brandy, to a chicory-infused coffee liqueur and four types of gin. Master distiller Lance Winters says, “The point of being a small distillery is doing something that the big distillers won’t do,” and this is about as well developed of a small distillery as you’re going to find.

Pro Tip: Take the SF ferry to Alameda and bike or walk the half-mile to the distillery on a Saturday or Sunday. Make a reservation in advance just to be safe, but it’ll easily be the highlight of your weekend.

Cocktail Idea: St. George Terroir Gin with a squeeze of lemon over ice. Simple yet remarkable.

One of the most recognizable bottles in SF, Distillery 209’s fine craft gin has been produced at Pier 50 since the early ’00s, but the company’s history reaches far beyond that. Owned by the Rudd Vineyards family (who previously owned fine foods purveyor Dean & DeLuca), No. 209 is named after the original property in Napa that housed the nation’s 209th distillery founded in 1882. Today, “Ginerator” Arne Hillesland makes a modern gin, with less juniper and the inclusion of South Asian spices like cardamom and cinnamon-y cassia bark.

The whole operation is made possible by Rosie, a 24-foot-tall Scottish alembic pot still with a 1,000-gallon capacity. The resulting spirit is more citrusy than earthy, uniquely spiced, and “sweeter than your grandfather’s gin” according to the Ginerator himself. Distillery No. 209 also boasts a line of kosher gin and vodka as well as barrel-aged gin, aged in both sauvignon blanc and cabernet sauvignon barrels.

Whiskey distilled from beer?! Yes, it’s true. Two-year-old Seven Stills distillery has made this idea a reality. Its raw materials are the same as Bay Area favorite Pacific Brew Labs and the result is a unique whiskey that’s an homage to the Bay Area. In fact, the sign in front of the Whipnose double IPA whiskey at K&L liquors asks you to “Imagine if Pliny the Elder were a whiskey.” It’s a whimsically accurate description of this wonderful and complex spirit, which along with the Chocasmoke oatmeal stout whiskey, comprise the up-and- coming lineup of Seven Stills. It’s a small operation that has a unique take on craft whiskey, and distillers Tim Obert and Clint Potter even launched a successful Kickstarter campaign to raise money for a line of bitters using seasonal locally sourced ingredients.

Carter Raff is a fifth generation San Franciscan and built his Treasure Island pot still with his bare hands – everything from the woodwork to the welding. He’s your prototypical spirits savant and his subtly anise-flavored Emperor Norton Absinthe Dieu is done in the true French style with wormwood imported from the commune of Pontarlier in France. “The absinthe is my star child,” he says of the 100% grape-base spirit.

Raff’s nationally recognized Bummer & Lazarus Gin (also grape-based) is citrusy and floral, with a unique creaminess. You might recognize the bottle from the beautiful Anthony Auston–designed label – depicting San Francisco’s legendary dogs Bummer and Lazarus – from one of 175 available San Francisco locations. Be on the lookout for Raff’s Barbary Coast Rhum Agricole (made from 100% cane juice) and vodka, out next year.

Cocktail Idea: One part Emperor Norton Absinthe Dieu, one part water. No ice, no sugar. Then, let the memories of Europe come to you.

Believe it or not, Anchor Steam’s spirits operation has been in operation since 1993, when former owner Fritz Maytag was inspired to produce America’s first pot-distilled rye whiskey. Today, Anchor has a handsome lineup of proprietary spirits, headed up by distiller Bruce Joseph, that include the Old Potrero whiskeys, Junipero, Genevieve, and Old Tom gins, as well as Hophead vodka and even a deliciously spiced Christmas spirit at holiday time, made from the same ingredients as Anchor Steam’s yearly Christmas Ale.

The Old Potrero 18th-century-style whiskey seems like something the characters on HBO’s Deadwood would drink. Along with the Single Malt Old Potrero Rye, it’s aged in uncharred American oak barrels. The Junipero gin is very traditional and juniper forward, whereas the Old Tom gin uses wormwood and stevia and pleasantly comes across with a soft absinthe quality.

Carl Bender and Christopher Cohen are blending real Canadian rye on Treasure Island. Cohen is originally from Canada and they’re sourcing rye directly from Alberta. The result is a strong and beautiful seven-year whiskey with vanilla and raisin tones. It’s aged in new American oak, which comes through on the palate masterfully and this is the kind of mean whiskey you might want to drink along with your favorite Pilsner beer. It’s also a fine whiskey for creative cocktails.

The excellent seven-year-aged Batch 001 of Bender’s Rye is still floating around bars and bottle shops in town, but the stronger and more complex nine-year-old second batch is one of the most unique and realized new local spirits.

You might know Brendan Moylan as the owner and operator of Marin Brewing Company. But he’s been the general manager of Stillwater Spirits in Petaluma as well for 11 years. Available in both Marin and SF, the Stillwater/Moylan’s line of whiskeys includes three single malt whiskeys. Barley instead of corn is used before adding the ingredients to a copper pot still from Kentucky to produce an 4.5-year-aged whiskey as well as an 8-year-aged cask strength and another 8-year double-barrel cask strength variety. “The barley is like caramel candy,” Moylan says, and it sets these whiskeys apart from others that use corn spirits. Also available are a full lineup of craft vodkas, American gin, and eau de vie spirits like grappa, schnapps, and brandy.

A champion of the grain-to-glass movement, Spirit Works Distillery’s operation has been growing under distillers Timo and Ashby Marshall. Grain to glass means every aspect of the spirits is produced with local ingredients. Their gin uses 100% red winter wheat from the Sacramento Valley, and the citrus is freshly zested not into the pot, but into a net above the pot, so as the vapors come up from the still, they capture the essence and boast distinct orange blossom notes.

Their whiskeys will be available in 2015, but the real winner here is the Spirit Works Sloe Gin. You might be familiar with that overly sweet bar mixer liqueur, but this one is tastefully made by macerating sloe berries into Spirit Works gin. The result is a divine digestif that is elegant enough to mix into delicious cocktails. Spirit Works’ distillery tour and tastings are available Friday through Sunday.

A nice little offshoot of a Livermore Valley wine tasting tour, Sutherland Distilling is currently open for tasting and tours of its fine Diablo’s Shadow Vodka and Silver Rum. Sutherland is another grain-to-glass-style distillery and the corn for its 90 proof vodka is sourced from the San Joaquin Valley “in the shadow of Mt. Diablo,” hence the name.

The Diablo’s Shadow rum was the first spirit made by Sutherland and it’s a reflection of a meticulous process. It uses 100% Morena cane sugar, yielding a sweet and smooth flavor. While distribution is currently limited to mainly the East Bay, make an appointment to go visit the tasting room in Livermore!

For now, this one is San Francisco’s unicorn: Tough to find, but it’s a big reward once you do. Workhorse’s “Redhorse Rye” is 70% rye, 20% barley, 10% wheat, and 100% organic. It’s aged in French oak, merlot/carignane wine barrels, which gives the whiskey a deep amber caramel color. It has unique, smooth chocolatey tones and is a truly beautiful local spirit. Distillers Rob Easter and David Gordon originally started Workhorse in the Mission, but have since been distilling at more robust facilities around the bay. They now even have a line of bitters highlighted by a Salted Cacao variety made in collaboration with Dandelion Chocolates and Coffee Rye bitters made in conjunction with Four Barrel Coffee. Happy hunting — and be on the lookout for two new whiskeys from these guys on the near horizon as well!