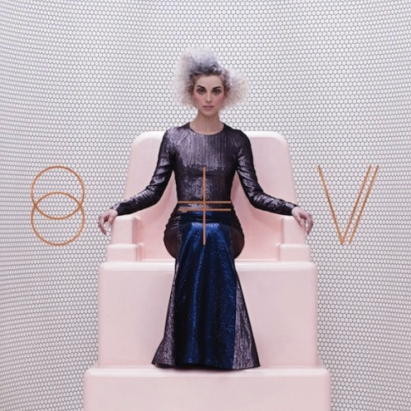 This is the rare and beautiful moment in music when a great artist becomes one of the greats. On St.Vincent, her self-titled 4th LP, Annie Clark has turned the corner in her career and realized her full potential as an artist. This is her at her most confident and schooled, writing meaningful songs and still wailing on the guitar in ways that at times don’t seem physically possible. This is her Mt.Olympus and it’s really fucking excellent.

On the heels of her Love This Giant collaboration with the great David Byrne, Clark has developed into a different type of artist. One that’s taking creative leaps into uncharted land, that reaches far beyond her music. The visual aesthetic she’s established for herself shows a full commitment to being the artist she wants to be. Extreme example, but this is similar to what Kanye West has accomplished. It’s an act, but it’s not. It’s true artistic expression and Clark believes in every figment of her art. She’s extremely well-read in what it takes to be a pop culture icon (This 2011 interview in which she discusses her fascination with Marilyn Monroe has always struck a chord with me.)

The song-writing on St.Vincent is ambitious, confident and wildly successful. The album’s first single, “Digital Witness,” dissects America’s obsession and reliance on digital media. The extravagant horns peppered in with Clark’s tongue-in-cheek vocals, totally work as a first release. She delves into this theme in more scathing fashion on the incendiary “Huey Newton”:

The album’s opening track, “Rattlesnake,” might be the biggest, boldest and most seamlessly explosive opening track of the year. I myself have a moment I’ll never forget with this track: On a bus at 5am, at the base of Machu Picchu, I’m in the very back of a packed bus that takes you up to the entry to one of the world’s greatest wonders. It’s dark, I can’t even really see the faces of anyone else on this bus and I cue up St.Vincent and press play. I was absolutely gripped by the intricacies of “Rattlesnake,” my whole life flashed before my eyes as I began the last leg of a journey that changed me forever…I thought about all of the events that happened in the last year+ to bring me to this very moment in time…in South America, in Peru, 3 days into a solo trek, at the foot of Machu Picchu, over 4000+ meters above sea level. I nearly lost my shit.

My mind swirled with memories…memories of seeing St.Vincent at Terminal 5 in New York before I left in March and her performance of “Regret,” my favorite song on this album and just absolutely shredded away at the most perfect and poppy guitar riff. I thought about her robotic movements in a polemic performance of “Birth in Reverse” on SNL that left Americans scratching their heads.

I thought about the first time I saw St.Vincent at Velvet Jones in Santa Barbara in 2007….How this beautiful and delicate being, produced such amazing sounds through her voice and her guitar…oh that guitar. And you see…this is what the greats do. They can bring back a flurry of emotions and memories of your life and their own, with just a simple three and a half minute song. They can write a song where they sing “I prefer your love to Jesus,” have everyone up in arms about that claim, only to realize that it’s a song about how much she loves her mother, who nearly passed away last year. They can tackle tragic historical figures and loop their story back into life for misunderstood groups in New York.

And Clark does all of this and makes it accessible and beautiful. She manages to make it all pop and that’s when you know an artist has a grasp on what it means to be an artist. This album was at the top of my list for most of the year, is hands down her finest work to date and should go down as one of the finest examples of blurring the line between whatever “indie” is and isn’t.

I remember the first time i encountered St. Vincent’s Annie Clark…Gracing what felt like an under 100 person crowd at Velvet Jones in Santa Barbara in 2007. I got dragged to the show by a friend who clued me in that Clark had worked with notable artists like Sufjan Stevens and The Polyphonic Spree and that now she was on her own…This beautifully fragile creature stepped out onto the small stage and proceeded to absolutely WAIL on the guitar, with comforting vocals that showed the slightest glimmer of pain and i thought to myself, “How can anyone hurt this precious and perfect being?” She was like Milla Jovovich’s Leeloo Dallas from The Fifth Element and i left that night in love. Music had done it to me again and little did i know that I’d be following St.Vincent all the way through to her now 4th album, the self-titled St.Vincent. She’s an artist that has evolved her style along the way, seemingly becoming more comfortable with unconventional expressionism on every incarnation of songs. (Particularly as of late, likely due to an influence of the great David Byrne, whom she collaborated with on 2012’s Love This Giant.)  This evolution is unique and notable, in that it’s been accompanied by an increasing grandeur in her output. Time to reflect on the 6 shiniest singular moments in her career:

6. “Now, Now” – The opening track from her first album Marry Me, was also the first track she played at that aforementioned Velvet Jones show. Her guitar is xylophonic and from the get-go, we’re introduced to precisely what she says she isn’t:

“Im not.
One small atomic bomb.

5. “Actor Out of Work” – On the first single from her 2nd album Actor, Clark comes into her own lyrically. A smug decry of a ruthless lover:

“You’re a supplement, you’re a salve
You’re a bandage, pull it off
I think i love you, i think im mad
You’re a cast signed broken arm
You’re an actor out of work”

So many emotions with one hook and the entire time her tongue is pressed firmly against the inside of her cheek. But the song is truly made by one of her greatest guitar riffs.

4. “Regret” – Easily the standout off of her 4th album. It defines the new, evolved, post Love This Giant St. Vincent. Her music has ceased being something we’re used to hearing and has morphed into this dark and spooky performance art. Her body movements and emphatic guitar playing just pours from the speakers. On St.Vincent, she’s rounded out an already illustrious career and taken it to a whole new level. Watch this performance at Diane von Furstenberg’s 40th Anniversary and note the way she becomes one with the confines of her guitar and the body-rattling culmination of the track at the 2:40 mark:

3. “Cruel” – She builds a fully developed musical experience on her third record, Strange Mercy. On “Cruel”, she brings us a delicious guitar hook and high pitched coos, sputtering into an electric mezcla of sounds that build to perfection. Just listen and bounce:

2. “Surgeon” – If there was ever foreshadowing of her transformation to a complete performance act, this was it. On Strange Mercy, her third and arguably best all around LP, Clark takes a turn towards the electronic, even with the sounds that her signature guitar produces. And she literally begs to get further into the realm of her brain’s creative locker in the Marilyn Monroe inspired chorus:

This is an artist that’s not satisfied with great music. She’s an artist that wants to push her musical creation to levels she doesn’t even know yet, but that she knows are somewhere inside of her (We see this come full circle on St. Vincent.) Which brings us back to the beginning of the story arc………

1. Laughing With A Mouth of Blood – Her attention to atmospheres highlights this single from Marry Me. It’s a song about wanderlust…a thirst for life and to be great:

“And i can’t see the future, but i know it’s got big plans for me.”

How did she know??! THIS is what makes her special. THIS is why she’s not just another singer songwriter, but rather one of the great contemporary artists of our time. Because she’s rested on the laurels of her own potential, without stopping to think about what limitations she has.  So pardon me if i’m the guy yelling “I love you Annie!” at her next show. Cause talent like this doesn’t come around too often.

I leave you with one of my favorite videos of all-time. Portlandia fans take note: