So a quick rundown of my class here in Korea. There’s 25 students, 16 from my cohort thats been together for almost 2 years, 4 from the cohort below us (all way cool and already an integral part of the crew) and 6 from a So Cal cohort. We’ve got 2 Korean sport mgmt students with us (Jin and Mihn Guk, they go to the “same university as chan ho park“; koreans are very proud of their national sports heroes) along with my professor dr. Choi. We ride around visiting korean sport related sites on this sexy whip:

Our first day of class was awesome. We hit up Samsung Badminton center and played badminton with olympians…. Id never played before and i quickly learned that i really suck. While similar to tennis, the racket has a smaller surface area and the shuttlecock (thats wht they call the little feathered ball u hit) is tough to pinpoint. Nonetheless, it was a blast. I filmed a quick video of the badminton demo the olympians played for us and i’ll post it later. Here’s a pic of me with a former olympic gold medalist, whos now the mens team coach: 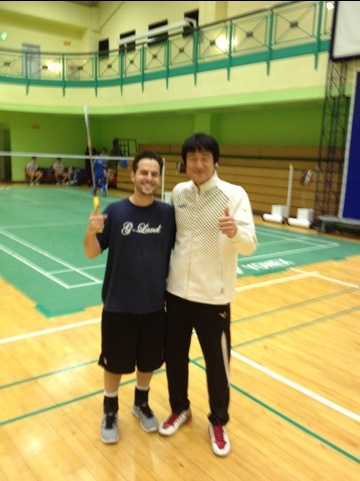 The best part of the samsung visit was lunch. Holy shit was this good:

The big rice bowl with veggies and mushrooms is ‘bibimbap’, theres korean bbq beef on the top left, halibut (so flaky and buttery) on the top right, beef brisket soup and kimchi (pickled cabbage, its the local specialty).

Our next stop was at KBS (the largest broadcasting company in S. Korea). We toured the facility and then met with Mr. Chung, who is a very well respected sports reporter ad documentarian. He’s like the Korean Ken Burns. We talked about everything from the mutually beneficial relationship of korean athletes with KBS to how Chan Ho Park becoming the first Korean to play in the MLB changed the face of sports media in Korea. We saw a rehearsal for the Korean SNL, ‘GAG’ and then visited an espn type show, where ex-white sox bullpen coach and korean legend Lee Man Soo was being interviewed. He was an awesome guy, took photos with us and chatted. Here he is (on the left) with dr. Choi:

At coca-cola korea, we watched some presentations on marketing strategy and saw a video for their ‘Move to the Beat’ campaign at the 2012 London Olympics featuring Mark Ronson and Katy B. Not gonna lie, it was pretty sick. Definitely more focused towards a european audience, but i love me some Katy B.

This hardly felt like “class”. These visits are definitely making me think in new ways and pondering options of what to do with myself and my career when i get back to the States. The fact that i dont work for Comcast anymore hasn’t really set in yet… But my brain is starting to formulate ideas for the future, the future i’m trying to use this sport mgmt degree to create. I like where my head is at right now and this is only the beginning of the next step. Fuck… I havent even begun to tell you about last night…………..stay tuned.

One thought on “The Set-Up”