NEW FEATURE: I’ve linked up with my ol’ buddy Maboo at RapGenius.com and some of the track hyperlinks now lead to the RG page with YouTube clips of the song, spotify links, lyrics and explanations…You can decipher em yourself too! Seriously cool stuff. Ok…back to the program:

I’ll admit…i’m an extrovert (surprise). But everyone needs time to reflect… zone out… and work…or think…. For me, i need an album i can throw on start to finish that’s gonna harness my concentration while providing the original score for whatever the hell i gotta get done. Interludes After Midnight is one of those albums…and a damn fine one at that.

Blockhead is a hip-hop producer from New York. Most notably, he’s produced what seems like every good track Aesop Rock has ever put out, like this one and this one.  Interludes (on famed trip-hop label Ninja Tune), is a collection of beats with samples layered over and over to create a sonata of sorts. The most ear-catching track on the album is the below, ‘Hungover Like Woah’, which describes how i feel more often than i’d like to admit…The 25-second spoken sample fades out, and the beat drops:

It puts me in a trance, where the relief from my brain’s woes lie squarely inside of itself. And i float away…..and keep floating… into this:

And i begin to rise out of my funk…and my brain starts to work and my head starts to bob up and down to the beat. The string samples and the distorted electronic horn sounds are mesmerizing and loop into the tracks whimsical closing track ‘The Robin Byrd Era’:

The samples blare: “Tic toc and ya don’t stop…tic toc and ya dont stop!”….”lips. and tongue. and cheeks. and eyes…” as the drum beat drops…and i’m smiling. Moving, doing…..and the interludes conclude…..and i just keep rolling onto the next Blockhead album on the discography.

Can you feel it? # 16, Blockhead’s Interludes After Midnight: 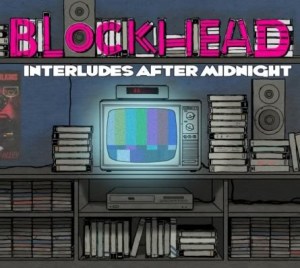