The winner of Five Thirty Eight’s “Burrito Bracket” was crowned today and it was none other than my neighbor down the hill, La Taqueria in San Francisco. To have an idea of how meticulous this challenge was for correspondent Anna Barry-Jester, 67,391 establishments were evaluated and 64 were chosen for Jester’s cross country road trip. In the end, my local haunt was the winner and after seeing my Twitter feed dominated by burrito shout-outs, I decided to make my way down the hill (it’d be rude not to.)

While I expected a massive line of techies and scenesters who wanted to instantly get a taste of America’s best burrito, the line was super tempered and it felt like just another lunch hour at La Taqueria.

I ordered the go-to carnitas burrito Dorado style (rolled on the grill for a bit after it’s complete):

I made sure to congratulate the staff (I’m kind of a regular) and snapped a photo of two burritos just before they were rolled to capture what 538 called “A technical marvel”: 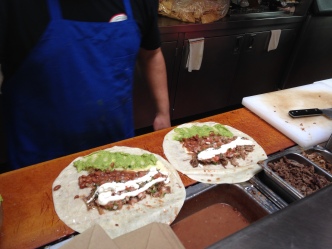 I will say that the carne asada burritos that were on the line after these looked far meatier, but I ultimately have no complaints with the amount of carnitas in my burrito. Here’s an inside look:

Also, the thing that I didn’t see talked about enough on the 538 coverage, was the heavenly green salsa they have. It’s one of the most perfect blends of spicy and flavorful smooth salsas I’ve ever had. I recommend using it liberally:

If I had one knock on this particular trip, it’s that my burrito fell apart towards the end, but I can probably attribute that to my own user error in unravelling the foil to take the 3rd photo on this post and then wrapping it back up like shit: 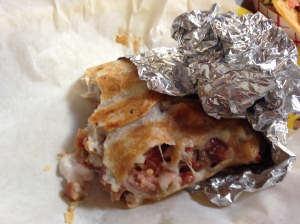 Lastly, La Taqueira’s owner Miguel Jara claims that “The atmosphere at the taqueria makes for a better tasting burrito.” And he’s not entirely wrong. There’s always a different slew of Mexican musicians in there playing and on this particular day,  I don’t think I’ve ever seen the musician get this many tips. EVERY table gave him multiple dollars. He killed it. 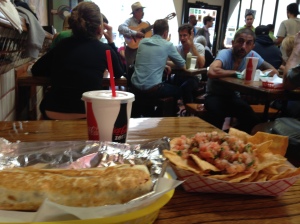 And there you have it folks. America’s best burrito is officially at La Taqueria in San Francisco, even though their tacos are better (but you didn’t hear that from me.)