Well this is exciting… Everything Ecstatic is presenting a movie at the Mission District’s iconic Roxie Theater! And not just a plain old movie, but a full-blown “cult classic party” celebrating the 40th Anniversary of The Warriors, with an immersive evening of film, music and beer. We like to call this little endeavor, Analog Time Machine.

Here’s the gist: Analog Time Machine is a film, a DJ set to start the evening featuring music from and inspired by the film and themed beers from our friends at Local Brewing Co. 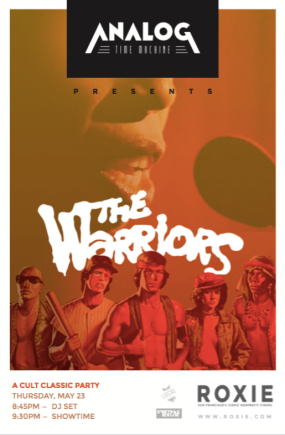 The Film: Walter Hill’s 1979 cult classic, The Warriors tracks a New York subway gang on a mythic 30-mile journey from the north end of the Bronx to their home turf in Coney Island. Their only obstacle is every street gang in all the five boroughs.

The Music: A 45-minute DJ set by our boy DJ Nutzeffekt, with music from and inspired by the film. Think Joe Walsh’s iconic “In The City” and old school soul-sample-addled Wu-Tang cuts.

The Beer: SOMA’s Local Brewing Company will have fresh cans of their Chasing Haze IPA (a double hazy IPA loaded with Citra hops and a touch of Mosaic and Hollertau Blanc hops too) and Honey Punches of Oats Pale Ale (A Spring seasonal pale made with honey from the beehives on the Fairmont Hotel’s rooftop hives…seriously)

RSVP to the event on Facebook, scoop your tickets and see y’all in the Mission on May 23rd! Caaaaan yoouuuu diiigg ittt!!!!!